Asian Carps in the Great Lakes

There have been 25 Grass Carp captured in Canadian waters since 2012 in Lake Huron, Lake Ontario and Lake Erie, but most of these were found to be triploid (sterile). Oxygen isotope analysis indicates these individuals likely originated in aquaculture facilities in the USA. To date, no Silver or Black carps have been found in the Great Lakes.

Asian carps are highly invasive and threaten the native ecosystems into which they are introduced. Three of these species (Bighead, Grass and Silver carps) are of immediate concern due to the close proximity to the Great Lakes. These species currently inhabit waterways throughout the United States including the middle and lower segments of the Illinois River, upper Illinois River and the Chicago Area Waterway System (CAWS) which are directly connected to the Great Lakes basin. This proximity could allow these invasive carps to spread into the Great Lakes unless effective measures are taken to prevent this.

In Canada, Fisheries and Oceans Canada (DFO)’s Asian Carp Program crews visit 34 locations in lakes Erie, Huron, Ontario and Superior to conduct early detection surveillance sampling. These locations were selected based on predictive models which indicated that they have suitable habitats for Asian carp species.

Locations are sampled at least once per year and those that were predicted by ecological models to be at highest risk of invasion are re-sampled up to a maximum of three times between May and November. The number of sample sites at each location varies depending on the size of the location and habitat types available.

Crews conduct boat electrofishing and deploy gill nets, trammel nets, hoop nets, fyke nets, trap nets, and bag seines. Larval light traps and bongo nets were added to the list of gears to sample for larval fishes as well as eggs. All fishes collected at each site are identified, counted, measured, and returned to the waters from which they came. Any Asian carps detected are removed from the water and taken to the lab for further analysis.

Upon capture of an Asian carp, the department proceeds immediately into response protocols. Response involves forming an Incident Command Structure and conducting an analysis of the Asian carp(s) that were captured which informs the type of response required.  In some instances an operational response is required and this focuses intensely on capturing any additional Asian carps that might be in the vicinity of initial detection and does not include sampling the rest of the fish community. 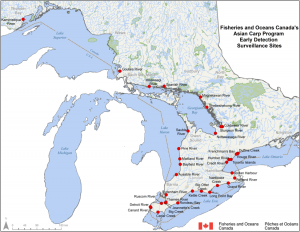 Map of Fisheries and Oceans Canada’s Asian Carp Program early detection surveillance sites in Canadian waters of the Great Lakes. These 36 priority sites are the focus for DFO’s sampling efforts.

A variety of sampling and removal tools are available to accomplish the objectives outlined above. This includes traditional sampling gears: electrofishing, trammel nets, gill nets, fyke, hoop, and trap nets, trawls, light traps, bongo tow nets, and seines.  Other techniques that have proven effective elsewhere and are being researched to determine their future use and include high-tech sonic detection and imaging devices (sonic telemetry and hydroacoustics, DIDSON, and side-scan SONAR), and newly developed or developing techniques (eDNA, water guns, chemical barriers, and feeding attractants).  Chemical pesticides (rotenone) may also be a future tool in the toolbox.

Electrofishing is a term generally applied to a process that establishes an electric field in the water in order to capture fishes by stunning them. When exposed to the field, most fishes become oriented toward the anode (source of current) and as the density of the electric field increases they swim toward it. In close proximity to the anode, they are immobilized and float to the surface where they are collected, allowing for the determination of abundance, density, and species composition. There are three types of electrofishing units that are generally used: backpack units, stream-side or shore units, and electrofishing boats.

Electrofishing is an important fish sampling tool and is one of DFO’s most frequently used tools. It is used to monitor for adult, juvenile and young-of-year Asian carps at fixed and random sites throughout the Great Lakes and Mississippi River basins and during response/planned intensive surveillance events and barrier maintenance actions.

Large-mesh trammel nets (a type of gill net) are frequently used in combination with electrofishing during fixed site monitoring and removal actions in Canada, the Chicago Area Waterway System, lower Des Plaines River, and upper Illinois Waterway. These nets target large juveniles and adult Asian carp and are typically fished in deeper, slow flowing waters nearshore or offshore. The sizes of these nets vary depending on the need, and range from 2-5 metres in height and 90-500 metres in length. New net designs will be incorporated into sampling programs as they become available.

These three tools trap fishes inside mesh enclosures. The fish enter the passive gear through constrictions, referred to as tunnels or funnels. They can vary in mesh size to target different sizes of fish. In hoop nets, the frames may be round, D-shaped or square, and are usually made from aluminum tubing. The tunnels are cones of mesh that are attached to a pair of hoops, so that when the net is set and the hoops are separated the narrow end of the tunnel points to the rear. The hoops can be held apart by spreader bars that are attached to the hoops, or by stretching the net between fixed points. These nets can be deployed in deeper, medium to fast flowing waters.

A fyke net is simply a hoop net to which wings and a lead are attached. Wings are short lengths of mesh with float and lead lines that are attached to the lateral margins of the first hoop and extend the longitudinal plane of the trap.

A trap net is similar to a fyke net, in that it has wings and a lead attached and a tunnel or tunnels though which fish enter, but it does not have rigid frames and is typically larger in size.

Bag Seines consist of a length of fine mesh strung between a positively buoyant line and a negatively buoyant line that is pulled through the water to encircle fish. A bag of the same mesh that extends behind the plane of the net is built into the midpoint, so that fish move into the bag as the net is pulled forward. A description of a seine normally includes its length, depth, the dimensions of the bag, and the mesh size and material. Sometimes the amount of flotation and weight on the lead and float lines is provided. Bag Seines can be used by wading (walking) or deployment from a boat. A single deployment and retrieval of a bag seine is usually referred to as a haul. In the simplest technique, two people walk in parallel through the water holding the seine forming a U-shape behind them. Seines are also deployed by keeping one end fixed and deploying the net in a semi-circle, either by wading or from a boat. The bag seine haul is collected by bringing the two ends together and pulling the net forward so that the encircled fish end up in the bag.  Bag seines are normally only used in water depths that are less than one half or two thirds the depth of the seine, so that the lead line remains on the bottom and the float line remains at the surface as the net is pulled forward. The netting process is easiest over smooth bottoms with no debris or obstructions, as the seine net can become snagged on rocks, logs etc., and often can only be freed by pulling the net backward off the object. Seine nets are used to target juvenile Asian carps.

Gill nets consist of mesh with square openings fastened to a positively buoyant line at the top, often referred to as the float line, and a negatively buoyant line at the bottom, often referred to as the lead line because this heavier line material has traditionally been used to weight this line. Gill nets are typically stretched between two fixed points by attaching one end to an immobile object such as an anchor or a tree along the shoreline and then moving away from that point while laying the net out. Once the other end is reached, it is also attached to an immobile object and the net is left in place to capture fishes when they swim into it. Fishes are caught in gill nets when they become wedged in the openings in the mesh or become entangled in it. Therefore, the size of the openings, referred to as mesh size, is a critical parameter affecting efficiency. Very large mesh sizes are typically used to avoid by-catch of non-target native species.

There is no evidence of spawning from any Asian carp species in Canadian waters; however, DFO deploys two gear types designed to detect eggs and larval fishes as a precaution. Bongo nets consist of two open circular frames, each with a fine-mesh, cone-shaped net and a collection cup attached at each end. The net is dragged horizontally through the water just below the surface to collect semi-bouyant eggs being carried with the flow (e.g. Asian carp eggs). This sampling technique may also capture larval fishes. The larval light traps are comprised of plexiglass chambers with a collection tray on the bottom and a buoyant top. A bright white light is emitted from the middle of the trap to attract larval fishes. These are set overnight, typically in one hour increments. Each unit is small, so can be placed in any habitat type (e.g. aquatic vegetation, around coarse woody debris, or in open water). They are typically set in a wetland near river mouths where larval Asian carps are likely to hatch out.