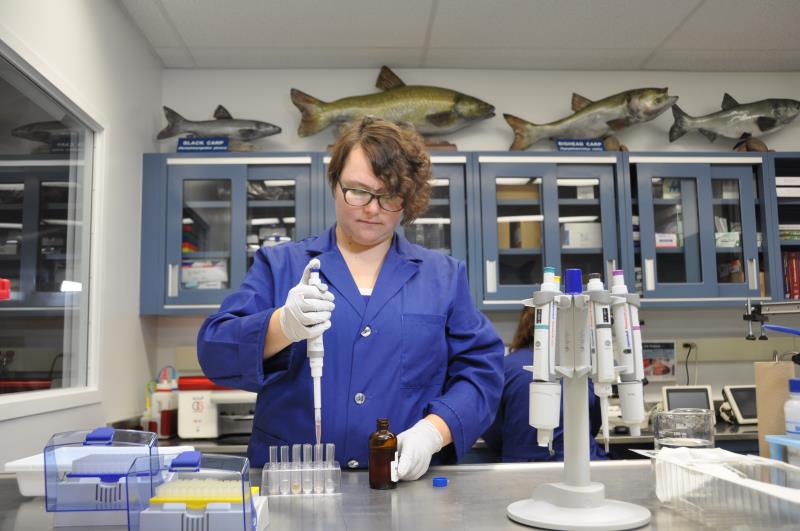 Environmental DNA (eDNA) monitoring has been used as an early detection surveillance tool in the U.S. since 2009, and recently in Canada since 2012. eDNA sampling is a process in which genetic material, such as cells containing DNA from tissue, mucus, feces and/or urine, is extracted from water samples to help determine the potential presence of an invasive species, such as Asian carps. At present, eDNA evidence cannot verify whether the DNA may have come from a live or dead fish, or from other sources such as bilge water, boats, storm sewers or fish-eating birds. eDNA monitoring is currently being done by both Canada and the United States in the joint effort to prevent Asian carps from establishing in the Great Lakes.

In 2012, in response to the detection of Asian carp eDNA in the U.S. waters of Lake Erie, the Ontario Ministry of Natural Resources and Forestry (OMNRF) expanded its eDNA surveillance programs within the Canadian waters of Lake Erie, Lake St. Clair, and the Detroit, St. Clair, and Thames rivers to monitor for Asian carps. The expanded program began in September 2012 and included eDNA surveillance occurring at 124 sites (96 sites were monitored twice) within those lake corridors, focusing on areas with suitable habitat for Asian carp. No positive detections of Asian carp eDNA or live specimens occurred during these surveillance efforts.

In 2013, the OMNRF continued its core surveillance programs within Lake Erie and the other Great Lakes. Working in coordination with U.S. partner agencies via the Lake Erie Committee, the OMNRF is assessing opportunities to expand current programs to include eDNA surveillance within key areas of Lake Erie. The OMNRF has also developed an Asian Carp Response Plan to help guide its future surveillance and response actions in the event that live Asian carps or positive eDNA samples are detected in Canadian waters

In 2014, the U.S. Fish and Wildlife Service (USFWS) implemented a comprehensive eDNA Monitoring Program targeted to detect the genetic presence of two species of Asian carps: Bighead Carp and Silver Carp. The goal of the program is to use eDNA as an early detection monitoring tool for the genetic presence of Bighead and Silver carp DNA, and use this information to help guide other monitoring efforts, such as state-directed netting and traditional methods for rapid assessment tools.